The music industry relies on royalties generated by the licensing of copyrighted songs and recordings as a primary form of payment for musicians. Intellectual property law and licensing systems have gone through significant adjustments over recent years as a result of the rise of digital music, but much of the industry's historic legal framework remains.

To start thinking about music in legal terms, it's important to realize that there are two types of musicians: songwriters and performing artists. These hold two distinct copyrights: songwriters hold the rights to the lyrics and melody of a piece of music, while performing artists hold the rights to a particular recording of a song, which is called a master recording. Songwriters may only seek copyright for a full song, and cannot divide lyrics and melody into separate rights.

The fees music users pay when music is performed publicly. The use of music over the radio, in a restaurant or bar, or over a service like Spotify or Pandora is considered a public performance.

Expand the images below to learn more about the flow of royalties from various sources: 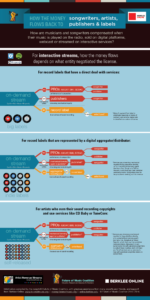 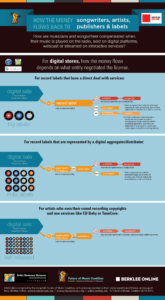 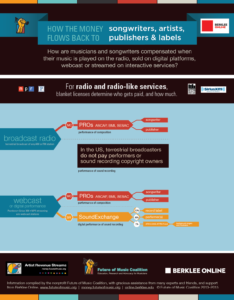 Terrestrial radio stations do not typically pay master royalties, as radio play has traditionally been viewed as free advertisement for a recording. However, radio play may or may not have a positive impact on sales, and congress is considering legislating that the royalty be paid. At present, recording artists only earn master royalties from radio when their recordings are played in a non-interactive digital arena where the listener is a subscriber (i.e. satellite radio).

What To Do Next

Now that you have a firm grasp of how music copyrights work, you should create a free account to view all of the music royalty assets we have up for auction on the site. You can create your free account in less than two minutes by clicking the button below.

A Guide to Music Financing for Artists 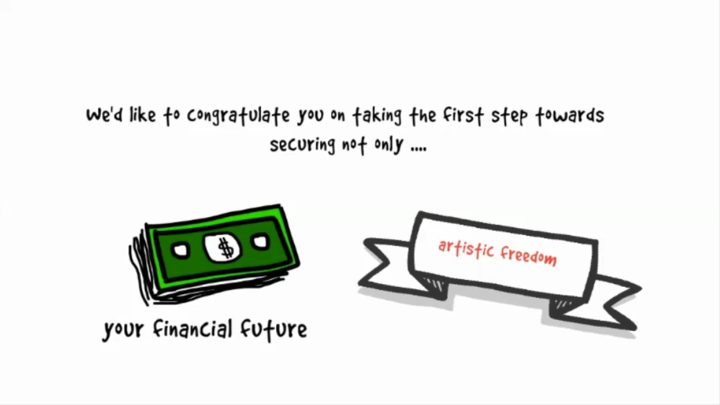